“Anxiety Does Not Empty Tomorrow of Its Sorrows; It Empties Today of Its Strength.” -Alexander McLaren

Sometimes on your travel through hell, you meet people who think they are in heaven, because of their cleverness and ability to get away with things. Travel past them, because they don’t understand who they have become, and never will. These types of people feel justified in revenge and will never learn mercy or forgiveness because they live by comparison. They are the people that don’t care about anyone, other than who is making them feel confident. They don’t understand that their deity is not rejoicing with them because of their actions, rather he is trying to free them from their insecurities, by softening their heart. They would rather put out your light than find their own. They don’t have the ability to see beyond the false sense of happiness they get from destroying others. You know what happiness is, and it isn’t this. Don’t see their success as their deliverance. It is a mask of vindication which has no audience, other than their own kind. They have joined countless others that call themselves “survivors”. They believe that they are entitled to win because life didn’t go as planned for them. You are not like them. You were not meant to stay in hell and follow their belief system. You were bound for greatness. You were born to help them by leading. Rise up and be the light home. You were given the gift to see the truth. They will have an army of people that are like them and you are going to feel alone. However, your family in heaven stands beside you now. They are your strength and as countless as the stars. It is time to let go!

“There is a stubbornness about me that never can bear to be frightened at the will of others. My courage always rises at every attempt to intimidate me.” ―Jane Austen

*Reading this makes me incredibly sad, and a little angry.

Growing up in an abusive home, I was never truly afraid of my father. Most of his threats were empty and the few times he came close enough to possibly hurting my mother or brother, I would physically intervene and put them behind me. I was nine/ten/eleven, and I never once thought that protecting them was wrong. One day he pushed too far and I knocked him on his ass. I was already well into my teens at that point. Eventually, my mother was afraid I’d kill him, which is ultimately what gave her the strength to begin the process of leaving him.

People used to ask my mother all the time if she was afraid for me. “Aren’t you worried or afraid of the guys she dates trying to take advantage or harm her?” Her response was, “Nope. They should be more afraid of her. Just because they’re taller or weigh more doesn’t mean she isn’t prepared to take them down. I trust her judgment.” This conversation came up a little too often with her colleagues and friends. It played into the gender roles that are “expected”; hell, they still are. Telling a group of women she trusted me to make the right decisions and take someone out, if need be, was quite alarming to these privileged individuals whose daughters moved across the country (or to another country, entirely) to get away from their overbearing behavior. Not all girls/women are delicate little flowers. Some of us know better, and aren’t into being treated in such a manner. I will stare a man down if he acts like I can’t do things without assistance. If I need an assist, I will ask for it, but I dislike presumptions of weakness.

Why do we, as a society, (still) act like women, by proxy, are automatically victims? Why do women feel victimized enough to say these are their fears of men? Those are very big fears for women to have. They should be concerns, as opposed to fears. It makes me question who these women are and what they’ve already experienced in order to feel this way.

Yes, I know women who have been raped and sexually assaulted, and many of them blame themselves. They are often too afraid to report the incident and between the police and the legal system, they are failed by both from start to finish. This is NOT acceptable. We cannot blame ourselves for the actions of violent men. While I’m on the subject, why aren’t men smart enough to stop fearing whether or not they will be laughed at when their true fear is being rejected? Why do men think they’re owed sex because you agreed to have dinner with them? There’s no meal on this planet that is deserving of sex as a “reward” or as “payment”. Get the fuck out of here with that thought process! Obviously, not all men view it this way. There are good men in this world, but far too many do think like this. We have to keep educating both men and women regarding these matters.

Gender roles are changing, but not enough. I am the first one to suggest that women take self-defense classes. I was lucky enough to be one of the only females in a family full of men. I can shoot straight, throw straight, and put a three hundred pound man on the ground with just a few moves. When people were concerned for my safety as a writer, I had to tell them this, and they were shocked. If you can learn something that will give you peace of mind, I encourage it and support you.

There’s a popular quote that says, “Here’s to strong women. May we know them, be them, and raise them.”

No one is questioning the strength of men, but the mental, emotional, physical, and spiritual strength of women is challenged daily. I’m used to being underestimated. By men, and by other women. But I’m not bothered about it for myself. I am bothered by it for other women. And to be fair, I am also bothered by good men being accused of things they haven’t done. Yes, we should believe men & women when they are brave enough to report something awful, but people are still innocent until proven guilty in the United States. Except Harvey Weinstein. He makes the Devil seem like a kindhearted concept.

Do you have anything to add to what I’ve said? If so, please leave your comments below.

Copyright ©2020 by Lisa Marino and Poison In Lethal Doses, LLC. ALL RIGHTS RESERVED.

“People are going to come into your life, and God is going to use them to help you. To them you’re insignificant and don’t matter. They are not going to understand you, or even see the point of why God had you hang in there with them for so long. Remember this: Sometimes meeting someone has nothing to do with what you can provide for him or her and everything to do with what God needs you to recognize in that person. If you didn’t understand the message, God will keep sending the same person or situation into your life.” ―Shannon L. Alder

“Those who love much, do much and accomplish much, and whatever is done with love is done well…. Love is the best and noblest thing in the human heart, especially when it is tested by life as gold is tested by fire. Happy is he who has loved much, and although he may have wavered and doubted, he has kept that divine spark alive and returned to what was in the beginning and ever shall be.

If only one keeps loving faithfully what is truly worth loving and does not squander one’s love on trivial and insignificant and meaningless things then one will gradually obtain more light and grow stronger.”
―Vincent van Gogh 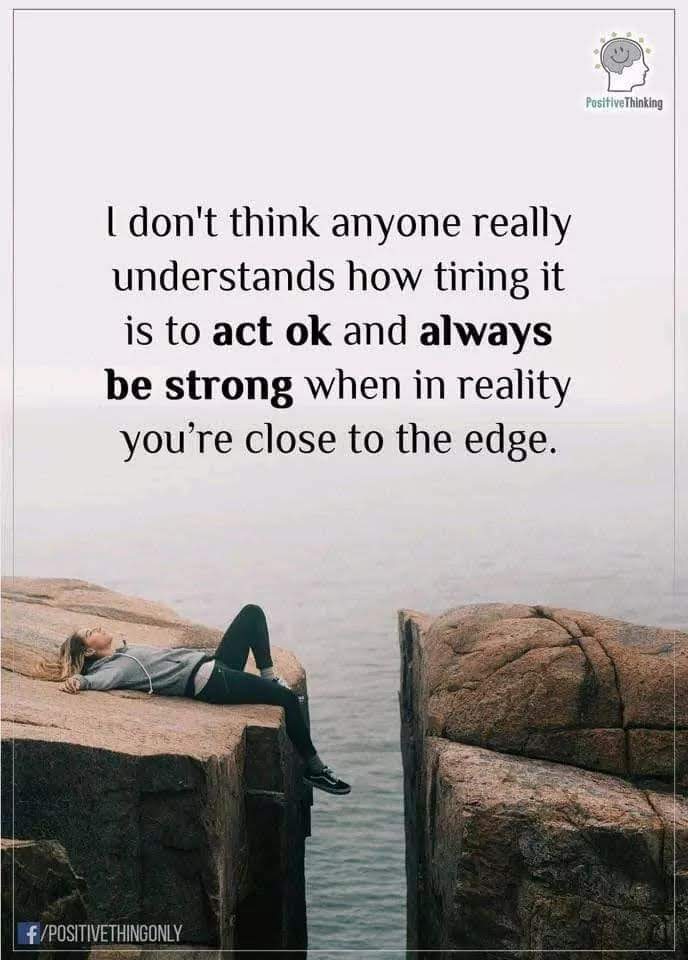 I’m not a good actor, ask anyone who truly knows me. I don’t excel at faking things with bullshit, smiles, and pretend laughter in an attempt to project that “Everything’s great.” When people try that with me, I wonder what they’re trying to prove by lying.

This morning, I was on that ledge. I’m not off of it, and I might never be. Everything in me was trying to push forward and plan my day, which had been planned for weeks, but my body was screaming at me to stay put. My best friend talked me down and reminded me that it’s okay to cancel if I don’t feel I can do something. So after hoping medication would help (it didn’t), I made four calls and cancelled my appointments. Part of me felt immense guilt (I rarely cancel on anyone. Especially last minute. It’s even more rare for me to cancel a medical appointment, or in this case, two.), but another part felt calmer. I’m still NOT okay. I just know that when I feel immense dread, I have to listen to my body and my intuition. Whatever Higher Power intervened on my behalf today, despite making me feel like a basket case, did the right thing. If pushing makes you question your safety, LISTEN. My intuition is NEVER wrong. It has kept me alive during natural disasters, and one unexplained disaster. You can be strong and smart, and still say, “Not today.”

These next few days, I’m going to try to be calm and focus on me. I need the break. I need quality sleep and to not be in physical or mental agony. It’s OKAY to not be okay. I lead by example. You should try it.

copyright © 2012-2019 by Lisa Marino & Blackbird Serenity, LLC. ALL RIGHTS RESERVED. Written work by author may not be shared or posted anywhere without express written consent from the author. Excerpts and quotes from the material also require consent. This authors’ work and personal photos are protected under U.S. and International copyright laws. Further protection is under the Digital Millennium Copyright Act. ALL RIGHTS RESERVED.

Sometimes, I wish I still had an ounce of faith left to believe all of the positive things I post. I’m trying, but I’m also suffering and fighting, and when you’re going through all of that, faith is hard to come by. But someplace, somewhere, hope resides.

Poison In Lethal Doses®™
is a registered trademark. Written work by author may not be shared or posted anywhere without express written consent from the author. Excerpts and quotes from author material also requires consent. This authors’ work and personal photos are protected under U.S. and International copyright laws. Further protection is under the Digital Millennium Copyright Act. ALL RIGHTS RESERVED.